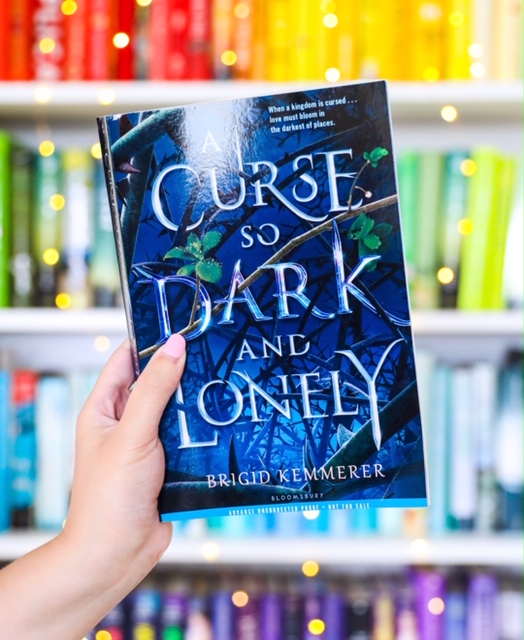 ARC provided by Bloomsbury in exchange for an honest review

Title: A Curse So Dark and Lonely

Series: A Curse So Dark and Lonely, #1

In a lush, contemporary fantasy retelling of Beauty and the Beast, Brigid Kemmerer gives readers another compulsively readable romance perfect for fans of Marissa Meyer.

Fall in love, break the curse.

It once seemed so easy to Prince Rhen, the heir to Emberfall. Cursed by a powerful enchantress to repeat the autumn of his eighteenth year over and over, he knew he could be saved if a girl fell for him. But that was before he learned that at the end of each autumn, he would turn into a vicious beast hell-bent on destruction. That was before he destroyed his castle, his family, and every last shred of hope.

Nothing has ever been easy for Harper Lacy. With her father long gone, her mother dying, and her brother barely holding their family together while constantly underestimating her because of her cerebral palsy, she learned to be tough enough to survive. But when she tries to save someone else on the streets of Washington, DC, she’s instead somehow sucked into Rhen’s cursed world.

Break the curse, save the kingdom.

A prince? A monster? A curse? Harper doesn’t know where she is or what to believe. But as she spends time with Rhen in this enchanted land, she begins to understand what’s at stake. And as Rhen realizes Harper is not just another girl to charm, his hope comes flooding back. But powerful forces are standing against Emberfall . . . and it will take more than a broken curse to save Harper, Rhen, and his people from utter ruin.

I’ve been dreading writing this review because I know so many early readers have praised this book. While I did enjoy reading it with my dear friends, I just wasn’t blown away and, sadly, don’t have much interest in the sequel.

This is a Beauty and the Beast retelling, but darker. Each season a girl is kidnapped to be forced to fall in love with the beast. If it fails, the beast has to relive each season over and over again until he can break the curse. Also, each season he turns into a different kind of monster that kills everyone in his path. However, the season Harper is kidnapped into his world will be the last season. Either she is to break the curse or he will die.

While I love the premise of this book, I was just not in love with the world building and I found Lilith a completely cringy, cheesy villain. I also thought the beginning of the book was such a huge mess and provided very little back story about Harper’s family. I really couldn’t even fall in love with the romance because the entire plot revolves around a kidnapping. And the “big twist” I could see coming from a mile away.

But what I did love was how this book brought awareness to cerebral palsy. Harper is on the higher-functioning spectrum of CP and it was nice to see such a strong heroine represented in this book. I found her to be extremely likeable and badass. The humor sprinkled throughout this story also had me smiling a lot, too.

I felt like the story started to really pick up by the last 1/4 of the book. What brought a unique twist to the story was how it weaves modern day Washington, DC alongside the magical realm. Seeing modern day characters transported into magical worlds is always my cup of tea.

So I did enjoy this book, and I found myself always wanting to keep reading once I picked it up. But I just didn’t fall in love with it like I thought I was going to. I didn’t love the writing and I wish the world building was more intricate. But I do think so many readers will love this book and I think you should give it a chance!