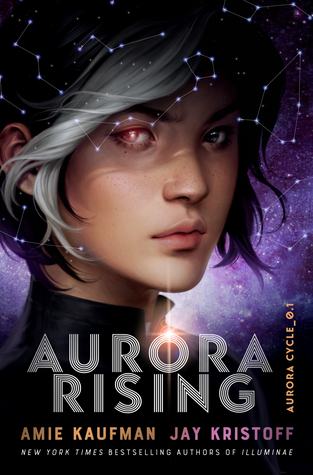 ARC provided by Knopf Books in exchange for an honest review.

From the internationally bestselling authors of THE ILLUMINAE FILES comes an epic new science fiction adventure.

The year is 2380, and the graduating cadets of Aurora Academy are being assigned their first missions. Star pupil Tyler Jones is ready to recruit the squad of his dreams, but his own boneheaded heroism sees him stuck with the dregs nobody else in the Academy would touch…

A cocky diplomat with a black belt in sarcasm
A sociopath scientist with a fondness for shooting her bunkmates
A smart-ass techwiz with the galaxy’s biggest chip on his shoulder
An alien warrior with anger management issues
A tomboy pilot who’s totally not into him, in case you were wondering

And Ty’s squad isn’t even his biggest problem—that’d be Aurora Jie-Lin O’Malley, the girl he’s just rescued from interdimensional space. Trapped in cryo-sleep for two centuries, Auri is a girl out of time and out of her depth. But she could be the catalyst that starts a war millions of years in the making, and Tyler’s squad of losers, discipline-cases and misfits might just be the last hope for the entire galaxy.

They’re not the heroes we deserve. They’re just the ones we could find. Nobody panic.

This review is going to hurt me, and I feel awful I even feel this way. I want to preface this by saying I really enjoy these authors’ previous works, and I think Amie and Jay are awesome humans who write amazing stories.

But… I was so disappointed by this book. I am trying very hard not to compare this to the Illuminae Files, but it’s hard not to when this is yet another story set in space featuring a group of young cadets.

This book follows six cadets who come together when their squad leader, Tyler, rescues a girl who was cryogenically frozen. Aurora doesn’t understand why she woke up 200 years later than anticipated, because she was supposed to land on a planet called Octavia III. But then we quickly find out Aurora has inherited some strange and deadly powers, so Squad 312 must escape in order to save her and themselves.

Tyler – The Alpha and squad leader. His level of attractiveness and dimples are mentioned so many times it’s going to make you roll your eyes into the back of your skull.

Scarlett – The Face (aka the diplomat) and Tyler’s twin sister. She is described as having firey red hair and just as stunning as her brother.

Cat – The Ace, pilot. She’s tough as nails and loyal to Tyler and Scarlett.

Kal – The Tank, Syldrathi, a Legolas-lookalike according to Aurora, but with darker skin and silver braids. The Syldrathi have a war history with the Terran people.

Finian – The Gearhead, Tech Division. He is Betraskan, so he appears “alien-like”; skin is white and he has to wear contacts which makes his eyes appear all black. He’s bisexual and presents with a disability for muscle weakness, nerve damage, impaired mobility.

Zila – The Brains, Science Division. She is described as having dark brown skin and curly black hair. She’s also very serious and matter-of-fact. I believe she may be on the autism spectrum but this is not my lane so I would love to see others chime in in regards to this.

Aurora – A Cryogenically girl frozen for the last 200 years and was supposed to wake up on Octavia III. She is Asian, described as having short black hair with a white streak, and freckles across her nose. She can do some serious damage but cannot control these new, strange powers.

I think what threw me off from the very beginning was that this was marketed as, “They’re not the heroes we deserve. They’re just the ones we could find.” Maybe it’s just me, but that quote made me assume we were going to be presented with a ragtag team of misfits who are subpar at their jobs but must come together to fight the good fight. When in reality we already have the best-of-the-best Legionnaire, his sister, his best friend, and three other legionnaires who are good at what they do.

So I’m already rolling my eyes at how misleading that was. However, I just could not get past how boring everything was. Part 1 showed us how the squad escaped with Aurora, Part 2 took us to the World Ship where a very long, unnecessarily drawn-out heist took place, and then Part 3 turned into a very bad sci fi movie rip-off.

And usually I can get over a mediocre plot, but when the “action” was putting me to sleep? I just had such a hard time picking this book back up. Also I couldn’t care less about any of the characters. Aside from Kal, everyone was extremely one-dimensional. There’s a cringey “mating bond” that appears between two of the characters, which honestly made me want to DNF right then and there.

Here’s the thing: Even though Illuminae isn’t my favorite series of all time, the friendships in those books were palpable. You felt connected to them. But in Aurora Rising? There were SO MANY POV’S that I couldn’t even keep track of who to care about. Every single squad member had their own POV (that’s SEVEN!) and they were all told in first person. Sorry, not a fan of trying to figure out whose POV I left off on if I had to put the book down in the middle of a chapter.

I know this book has already received a lot of early praise, so take my opinions with a grain of salt. I just can’t get over how messy everything was, how bland the characters were, and how much I just wanted everything to be over.