Charlie, a highly-strung, openly gay over-thinker, and Nick, a cheerful, soft-hearted rugby player, meet at a British all-boys grammar school. Friendship blooms quickly, but could there be something more…?

Charlie Spring is in Year 10 at Truham Grammar School for Boys. The past year hasn’t been too great, but at least he’s not being bullied anymore, and he’s sort of got a boyfriend, even if he’s kind of mean and only wants to meet up in secret.

Nick Nelson is in Year 11 and on the school rugby team. He’s heard a little about Charlie – the kid who was outed last year and bullied for a few months – but he’s never had the opportunity to talk to him. That is, until the start of January, in which Nick and Charlie are placed in the same form group and made to sit together.

They quickly become friends, and soon Charlie is falling hard for Nick, even though he doesn’t think he has a chance. But love works in surprising ways, and sometimes good things are waiting just around the corner…

From the author of Solitaire and Radio Silence comes a bind up of the first two chapters of Heartstopper, an ongoing webcomic.

Look no further if you want something heartfelt, cute, pure, emotional, and important, with beautiful art and the most lovable characters! Y’all, this comic melted my heart. I binged the entire webcomic on Tapas and then I ordered Alice Oseman’s self-published edition of Heartstopper: Volume 1 (it will be officially published by Hachette in February 2019!). I honestly love everything about it.

This comic follows Charlie, an openly gay student at an all-boys British grammar school. His classmate, Nick, is captain of the rugby team, and they become close friends. But then Charlie begins developing feelings for Nick, and Nick starts to question his attraction to Charlie, too.

This comic checked off so many boxes for me:

Not only is this comic a coming-of-age story about young love and friendship, it is also a story that addresses bullying and homophobia. Charlie was outted when he was not ready yet, and the aftermath of that follows him throughout the story.

I fell in love with both Charlie and Nick. Charlie is such a sweet and supportive friend, while Nick is the most kindhearted soul you will ever meet. And you will be rooting for these two from the very first page as you watch them navigate through their day to day lives playing rugby, studying together, and going to school.

And you will meet some other characters that help shape this story too. There’s Tao, Charlie’s best friend, Tori, Charlie’s cynical sister, and Tara, Nick’s old crush (but she’s now dating Darcy and they’re my faves! Oh, and we have the same birthday!) 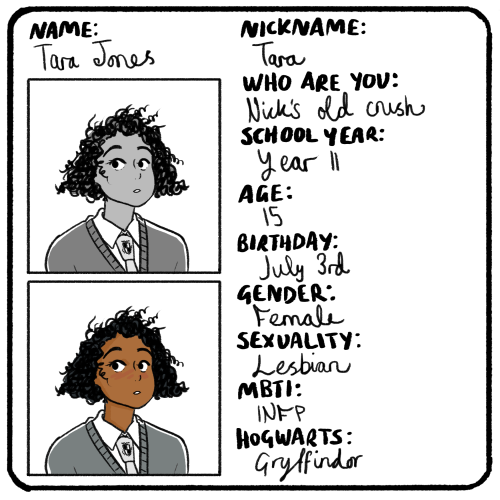 I hope you pick up this book and enjoy it as much as I did! Just a reminder that this webcomic is ongoing, so what you find on Tumblr and Tapas does not have an “end” yet. This copy in my photo is from Alice Oseman’s Kickstarter campaign, and it contains Chapters 1 & 2 of the webcomic. You might be able to still purchase the Kickstarter edition (and other merch) from Alice’s art shop, or pre-order the official publication edition (due to drop in February 2019).

(Photos of Nick, Tara, and Charlie’s bios are from Alice Oseman’s website)