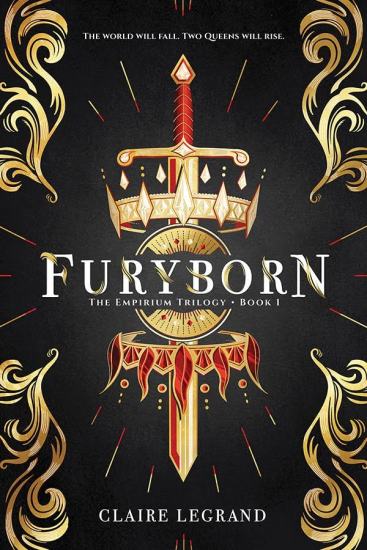 When assassins ambush her best friend, the crown prince, Rielle Dardenne risks everything to save him, exposing her ability to perform all seven kinds of elemental magic. The only people who should possess this extraordinary power are a pair of prophesied queens: a queen of light and salvation and a queen of blood and destruction. To prove she is the Sun Queen, Rielle must endure seven trials to test her magic. If she fails, she will be executed…unless the trials kill her first.

A thousand years later, the legend of Queen Rielle is a mere fairy tale to bounty hunter Eliana Ferracora. When the Undying Empire conquered her kingdom, she embraced violence to keep her family alive. Now, she believes herself untouchable–until her mother vanishes without a trace, along with countless other women in their city. To find her, Eliana joins a rebel captain on a dangerous mission and discovers that the evil at the heart of the empire is more terrible than she ever imagined.

As Rielle and Eliana fight in a cosmic war that spans millennia, their stories intersect, and the shocking connections between them ultimately determine the fate of their world–and of each other.

I wasn’t sure what to expect going into this book simply because the timeline of events from the synopsis had me wondering just how exactly our two female protagonists were going to be connected.

Furyborn is told in dual alternating POV’s: Rielle’s in the past, and Eliana’s 1000 years later. Right off the bat I knew we were in for a wild ride. The prologue was beautiful chaos. From the beginning I was in awe and left with so many questions.

One of blood. One of light.”

Rielle is fighting for her life as she must face seven trials in order to determine if she is the true Sun Queen. Not only does she have to save the world from angels, but she’s also faced with personal issues between her family, friends, and the person she’s in love with.

One thousand years later, we follow Eliana, who is an assassin trying to protect her family. She faces “trials” of her own when her mother, and other women, are kidnapped. Then she meets a stranger and her world suddenly becomes so much more complicated.

Now lets dive into the good and the bad:

The Bad (but not really):

Pre-order incentive: If you pre-order Furyborn, you could get some awesome swag. Go here to fill out the form! Hint: You can get a signed and personalized copy by pre-ordering from Books of Wonder! (I may or may not have accidentally pre-ordered this book twice. Oops.)

A very special thank you and shout out to my girl, Melanie, for inviting me to join a massive buddy read (which we dubbed ourselves the Furybros.) I can honestly say it was so much fun discussing this book with everyone! I am looking forward to so many more. ♥

Quotes taken from ARCs are subject to change upon final publication