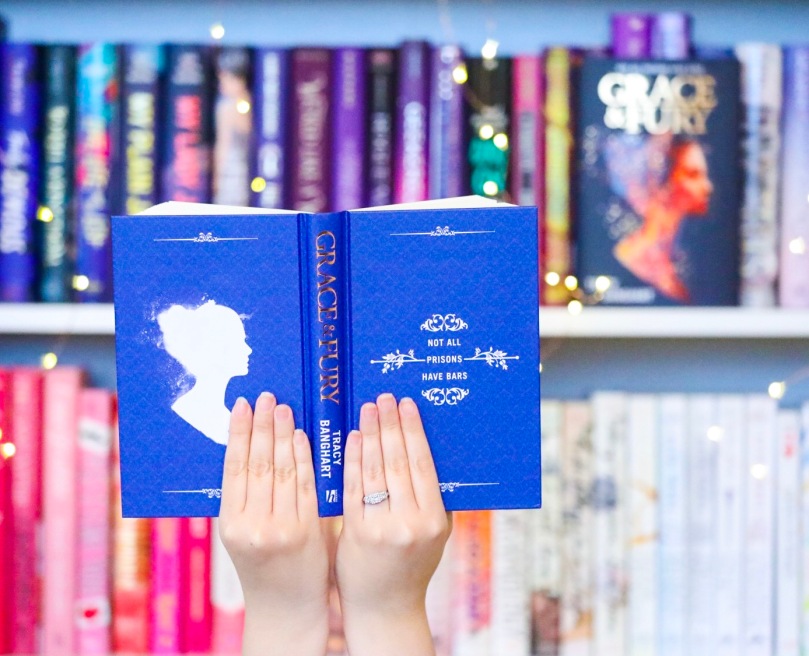 ARC provided by Little, Brown in exchange for an honest review / Finished copy provided by FairyLoot

In a world where women have no rights, sisters Serina and Nomi Tessaro face two very different fates: one in the palace, the other in prison.

Serina has been groomed her whole life to become a Grace–someone to stand by the heir to the throne as a shining, subjugated example of the perfect woman. But when her headstrong and rebellious younger sister, Nomi, catches the heir’s eye, it’s Serina who takes the fall for the dangerous secret that Nomi has been hiding.

Now trapped in a life she never wanted, Nomi has only one way to save Serina: surrender to her role as a Grace until she can use her position to release her sister. This is easier said than done. A traitor walks the halls of the palace, and deception lurks in every corner. But Serina is running out of time, imprisoned on an island where she must fight to the death to survive and one wrong move could cost her everything.

I really didn’t know anything about Grace & Fury but kept seeing it on NetGalley. Little, Brown was offering an instant download so I decided to give it a shot. Well, as good timing would have it, my rep package from FairyLoot arrived and it included an exclusive UK hardback edition of Grace & Fury! My friends were also planning a buddy read that very same day, so it was really meant to be!

Like I said, I knew nothing about this book and I ignored the synopsis. And I am so glad I did! Grace & Fury is told in alternating dual POVs: Sisters Nomi and Serina. This book started out feeling a bit stereotypical YA dystopia, and I was getting huge The Selection vibes. I was almost turned off until I got to the very first twist (very early in the book), and oh man, after that, I was ALL IN.

This is a world where women don’t have any rights at all. Its themes are very similar to The Handmaid’s Tale, and dare I say, major Hunger Games vibes, too. This is a story about the total oppression women receive by men, and how the only way “up” in the world is to marry the rich or royal. While I love the awareness this brings for equality, I do hope that as these types of stories become more main stream, they do not become overly glorified.

But, yet, this story is so much about willpower, sisterhood, camaraderie, and survival. I was loving the alternating POV’s and how each sister had to face such different, yet still horrible, situations. There were so many intense scenes that fueled my rage and made my jaw drop. However, the biggest negative, in my opinion, was the “climactic” reveal in the last 1/4 of the book. I could see it coming from a mile away so that took away a bit of the enjoyment for me. I was really hoping we’d get another twist, but instead the story  leave us on a cliffhanger! I feel like this book could’ve benefit from being a 500-page standalone instead of a series. But nonetheless, I’m still eager to read the sequel!

I hope I wasn’t being too vague in my review. I feel like the synopsis already gives so much away that I don’t want to spoil anything else for you! So, I suggest not reading the synopsis at all and going in blind! I think you’ll enjoy it so much more that way. Overall I had a great time reading Grace & Fury and definitely recommend it!

PS: If you’re interested in FairyLoot, you can use my code COURT5 for 5% off a 3 or 6-month subscription! It’s good until the end of July! 🙂

Join 629 other subscribers
Follow A Court of Crowns and Quills on WordPress.com

gracedwithbooks.com/
Star is All Booked Up